I’ve traveled a bit and seen some of the world. Born in Utah, raised in California, Kansas and Missouri, and then back to California for college. I chose journalism at a time when it was a particularly noble endeavor—the time of Nixon’s fall and the rise of Woodward and Bernstein—plus I’d always gotten good grades in English.

Journalism can lead to a wonderfully varied life because, for the most part, you are paid to peek into and tell the stories of others’ lives. Like Woodward and Bernstein, I was a print journalist, tracing a career that passed through a string of newspapers, each a little bigger than the last. Unlike the fabled Washington Post duo, my job was less about the glories of investigative journalism and more about everything else.

I was a sportswriter and a business editor (staff of me). I covered city council meetings, school boards and conducted thousands of interviews that became untold numbers of articles about ordinary and extraordinary folks, from suburban beekeepers and the creator of a dictionary for a language only he spoke to famous movie stars and authors.

I bungee-jumped, flew a fighter plane and went to sea on a research vessel that flips from floating horizontal atop the ocean to vertical with two-thirds submerged.

I went to some newsy places: Tiananmen Square in Beijing, Romania after the fall of Nicolae Ceausescu and a small village in Sandinista-ruled Nicaragua where I helped teachers from San Diego build a school. Once, I literally walked a good chunk of the U.S.-Mexico border to chronicle what I saw or stumbled upon, from ruggedly beautiful country and assorted border denizens to a covert military observation post.

In 1992, the paper I had formerly worked at and the one I was currently working for merged to become The San Diego Union-Tribune, and with it, I became a full-time science writer. Science is essentially advancement by increment. It’s slow and methodical. So too was my education as I covered—and learned—about everything research-related, astronomy to zoology. It was often daunting. My first story involved an interview a professor about progress in fluid mechanics, specifically hydrodynamics. I correctly surmised liquids were involved. I asked a lot of questions. The professor was patient and kind. And over time, I became smarter.

Though I wrote about everything from dinosaurs to distant planets, no topic has proven more consistently fascinating than my own species, Homo sapiens. And when, in 2010, after almost 30 years as a journalist I moved to UC San Diego Health to describe the work and tell the stories of its physician-scientists, that fascination became laser-focused.

UC San Diego is among the finest research universities in the world, and many of its faculty are recognized as global leaders and thinkers. It can be intimidating at times, listening and scribbling notes in the presence of genius, but exhilarating too.

I still go newsy places, only most are within all of us: from receptors studding the membranes of our multitudinous cells—portals for biological commerce, communications and  sentries standing guard against microbial invaders and malignancies—to the complexities of our brains and its principal product, our minds. The book Wiser is the brainchild of my collaborations with my co-author and guide, Dilip Jeste.

I have had other partners on this career-long journey. As a young journalist looking for a job in the early 1980s, I latched on to a novel enterprise called “videotex.” Think of it as the internet before there was an internet. Subscribers could read continuously updated news on their televisions! This was technology for the Jetsons. Videotex didn’t last, but I married a woman I met working there, and that marriage has.

Today, Marlee and I have two grown sons, both off on their own adventures, a dog named Doug and a tortoise called Boulder. I still go to work every day wondering where in the vast, uncharted territories of our bodies and minds my job will take me. 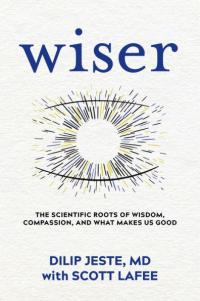